Description of the species: The Mediterranean monk seal is a sea mammal from the seal family. It only lives in the Mediterranean, where its total population has been estimated at 320-475. It can grow up to 3.5 metres, weigh up to 400 kg and reach an age of around 45 years old. A hundred years, ago it was spread throughout the Adriatic, though today it is seen as a regionally extinct species. However, in the last decade adult specimens have been seen every year in two or three localities in the Adriatic. Its shelters in the Adriatic are caves with gravely beaches or stone-plated caves.

Reasons for threat: The reason for the decrease in their number in the Adriatic is not known, as there have been no systematic studies. However, it is thought that the principal reason for their disappearance is illegal hunting due to the competition which they represent to fishing activities. 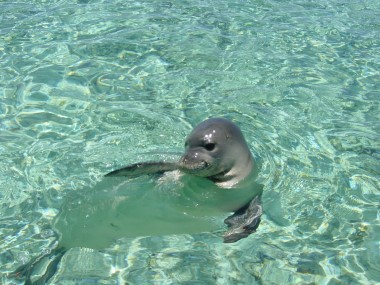 Illegal hunting can be reported on the following phone numbers:

Inspectorate for the Protection of Nature