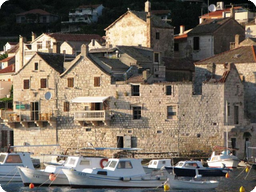 What to see in Vis

While visiting Vis, you have a unique opportunity to see the archaeological monuments of the town of Vis, which developed alongside the ancient remains of Issa, the first urban centre in Croatia. It is recommended to pay a visit to Vis Museum, situated in the Austrian fortress of Batarija.

There is a display of archaeological objects on the ground floor and also an ethnographic collection that will give you an insight into life in Vis over the centuries. There are exhibits relating to: archaeology, fishing, furniture, shipbuilding, viticulture, traditional costumes and modern artefacts. The exhibits provide an insight into life in Vis from ancient times to the present.

On the second floor, there is the largest collection of ancient Greek objects in Croatia. Exhibits in this part of the collection date from the 4th to 1st century BC. The exhibition consists of many red-figure vases, Gnathia vases,  local type of Issa pots, upper Adriatic vases and many different pottery items.

Apart from the above, there are also terracotta plastic, so-called Tanagra figurines, stone and metal objects. Next to the museum, there are archaeological sites where excavations are still ongoing. Martvilo is such a site. It is  situated behind the sports centre and is an ancient Greek graveyard. Over time, it has been destroyed and nowadays is only 1/5 of its previous size. You will be able to see what ancient Greek (4th-1st century BC) graves and gravestones looked like.

After this, continue an easy stroll by the sea shore and in 5 minutes you will get to another archaeological site, that of the Roman thermal spa (bath complex) from the 1st-2nd century BC. This site is also still being explored and there are indications that it is one of the largest bath complexes in the Adriatic.

Your stroll by the sea will take you to the Franciscan church and Conventual Franciscan  monastery built in the 15th century on the remains of an ancient theatre. The theatre remains can be seen in the monastery gardens and the remains of antique Issa stones can be seen in the monastery walls. Near the sea, around Prirov, one can also see the remains of the harbour buildings and the ancient town harbour that is now under the sea. We believe that you will not miss your chance to visit Vis’ cultural heritage sites, as it is a town that developed next to the ruins of the oldest urban centre in Croatia.


WHERE TO MOOR IN VIS