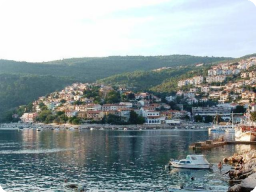 Rabac is the major tourist resort on the eastern coast of the Istrian Peninsula, some 40 kilometers from Pula and only five kilometers from Labin. Situated in Kvarner Bay, at the foot of towering slopes that protect the town and also ensure a mild Mediterranean climate, Rabac, with a tourist capacity of nearly 10,000 beds, can justly claim the title of ‘the pearl of Kvarner’.

Wonderful surroundings, a lovely pebbly beach, a pleasant climate and a view of Kvarner Bay all attracted holiday-makers and travel writers as early as the mid-19th century when Rabac was just a small fishing village. Its first hotel, Hotel Quarnero was built in 1889, but in spite of all its advantages, at the beginning of the 20th century Rabac could not match the more developed tourist resorts such as Pula and Poreč in the west or Opatija and Lovran in the east. Although the first larger hotel was not opened until as late as 1925, today Rabac is a developed tourist resort with about 15 hotels and apartment villages and several campsites. Its leading tourist companies are Rabac and Maslinica.

And just above Rabac, nestling on the top of the hill at a height of 320 metres above sea level, lies the old mining town of Labin. Today, now the mines have closed down, the town presents itself in a new guise. An increasing number of galleries, bars, studios, and a modern and well known multicultural center, which is a crossroads for the younger generation, have all found their ideal location right here in Labin, which all adds to the tourist offer of Rabac.

In the vicinity of Rabac, there are medieval towns such as Pićan, Gračišće, Paz and Boljun, which are also interesting places to visit. The slopes of Mt. Učka offer opportunities for hiking, and further south, at Skitača, with its magnificent view of Kvarner, besides hiking and trekking there are opportunities for other sports like free climbing, riding and mountain biking.