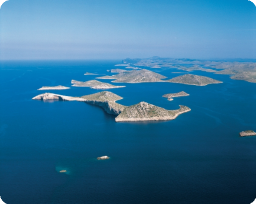 History of the Kornati islands

It has been shown that man has lived on the Kornati islands for several thousands of years. The incredible combination of the natural and manmade is reflected in the modest but impressive buildings (harbour, dwellings, dry stone walls, olive groves, piers, forts, castles, churches, salt pans, ruins, etc) which are an additional and worthy decoration of the Kornati National Park area.

Its relative distance from the mainland, the biological diversity of the marine area, piracy, good pasture, barren karst soil, shelter from ugly seas: these are the reasons why the Kornati islands have been a source of both hospitality and inhospitality throughout human history. Constantly on the border of being inhabited or uninhabited, peace and turmoil, wealth and poverty, the Kornati islands have always been a challenge for the different cultures and interests in the region.

The first traces of man's presence in the area of the Kornati islands date back to the Neolithic period. This assumption is supported by the discovery of a stone axe found in Željkovci field at the foot of Pedinka hill on the island of Kornat.

The first confirmed settlement of the Kornati islands dates back to the time of the Illyrians. Small square dwellings, individually or in groups (such as below Pedinka above Željkovci, Podselo near Trtusa, and Grba on Žut), ruins (Sčikat, Stražišće, Tureta, Grba) and tumuli (almost on every hill on the islands of Kornat and Žut) all testify to the significant population of the islands during prehistoric times. Raising livestock was the main economic activity, but fishing also played an important role in the economy of the inhabitants.

Even to the Romans, this area seemed interesting and attractive for housing and economic exploitation. The building by the Romans of the villa rustica at Proversa and the vivarium for keeping fish at Svršata interrupted (it is believed) the unitary living space of the Illyrians on the Kornati islands and Dugi Otok. According to some authors, this was probably the critical event for the continuity and intensity of Illyrian settlement of this region. Other traces of antique buildings that testify to the Roman colonisation of the Kornati islands are now mostly under the sea: the piers at Piškera and Šipnata, the harbour in Vela Proversa, and the salt pans at Šipnata.

The Byzantine period left what is according to numerous experts the most imposing building that can be found today on the Kornati islands. This is Fort Tureta on the island of Kornat (an example of architecture from late antiquity and the early Middle Ages, probably from the 6th century). It is supposed that the fort had the military purpose of securing and controlling navigation through the Adriatic Sea, which was quite uncertain at the time.

Another very interesting building from the Byzantine era is the early three-apse Christian basilica, which is located at the foot of Fort Tureta. The greater part of the apse and a part of the former foundations are still visible. Given the size of the church (30 x 13 m), it is assumed that there was a considerable number of inhabitants on the Kornati islands at the time. In the immediate vicinity of the church (in today's sheep fold), there are traces of the foundations of a former building which might have been a monastery of the Templars or Benedictines. It is interesting that the island of Kornat was named Insulae Sanctae Mariae, Stomorin island, etc throughout the Middle Ages because of this church (St. Mary's Church).

The arrival of the Croats in the Adriatic caused large demographic changes on all the islands, including Kornati. The Roman population, due to the invasion of the Croats was forced to flee from the land and seek refuge on the islands. As the sea represented an obstacle for the Croats for only a short period of time, conflict with Venice soon arose because of Venice's desire to dominate Dalmatia. This period, with the decline of Byzantium, the growth of Venice and the arrival of the Croats, was a critical time for the population of the Kornati islands. The Kornati islands were a very insecure place to live, and it has been assumed there was no permanent settlement on the islands until the 13th century.

In the 13th century, the Kornati islands started to revive. Some very interesting cultural buildings in the National Park area date from the Middle Ages. The most impressive is certainly the Church of Our Lady of Tarac, a modest one-apse building (a type of rural late Romanesque church), built on the site of an early Christian basilica and most likely from the ruins of the old church. The date of the construction of Our Lady of Tarac is not entirely clear. It is believed that it was built in the 12th-16th centuries. Today, masses are held in this church (the first Sunday in July) which have gone beyond the purely religious and become one of the tourist attractions of the area. The remains of warehouses for salt and the remains of salt pans in Lavsa Bay date back to the medieval period (probably the second half of the 14th century).

Medieval records indicate the presence of livestock breeders and farmers on the Kornati islands. The importance of the islands grew with the appearance of the Turkish threat to the coast, but also because fishing was becoming more and more significant for the economy in the region. Interest in the Kornati islands particularly increased after a new method of catching sardines was introduced in 1524 (the use of lights). A place called Sali on Dugi Otok had already been an important fishing centre since the early Middle Ages, but from the beginning of the 16th century it became the most important fishing centre in the Adriatic next to Vis and Hvar. This was especially due to the Kornati islands, as fishermen from Sali had the exclusive right to fish in this area. A Venetian castle was built on the islet of Vela Panitula at the beginning of the 16th century. Its purpose was to collect fishing tax from the Kornati fishermen. In 1532, the Venetian authorities ordered the Kornati fishermen to bring their catch to the islet of Vela Panitula for tax collection. Near the Venetian castle, on the island of Piškera (Jadra), the fishermen built  a settlement with 36 small houses and warehouses, eight piers and a drawbridge between Vela Panitula and Piškera, which was rather large considering the time and place. A one-apse church with Gothic elements was built within the settlement, and was consecrated in 1560. The fishermen only stayed in the settlement during the summer darkness (the best time to catch oily fish is when there is no moon in the sky). However, the castle and the whole settlement of Piškera vanished with the fall of the Venetian Republic at the end of the 18th  century. It is interesting that one can hardly see the traces of the settlement today. The castle has turned into the "remains of remains" (reliquiae reliquiarum). The church, on the other hand, has been restored, and is still used.

Because of the increasing insecurity in the archipelago during the 17th century on the one hand (frequent livestock rustling, abduction of shepherds on galleys, etc), and more developed and lucrative fishing on the other hand, the Kornati islands were practically depopulated. Peasants who had previously worked for the owners of the Kornati islands (noblemen from Zadar) turned to new sectors and new regions. The inhabitants of Murter, Betina and Zaglava took advantage of this. As new colony residents of noblemen from Zadar, they sought additional living space (on Murter, the Kornati islands were mentioned for the first time in 1627).The island of Murter in fact became overcrowded due to the influx of refugees fleeing from the Turks on the mainland and was not able to feed so many people. Economically speaking, there were two kinds of people at this time in the Kornati archipelago: 1) farmers and shepherds from Murter and 2) fishermen from Sali.

From the arrival of the new colony until the end of the 19th century, conditions in the Kornati islands did not change at all. Documents about life on the islands are very scarce.  At this time, the first rural dwellings were built and small properties were situated along the edges of the fields on the Kornati islands. The cadastral documents from 1824-30 registered 187 colonies with Murter as their place of domicile. These related mainly to the interior of the islands rather than the coast. However, it is important to emphasise that already by 1682 documents mention that the residents of the islands of Murter and Pašman and the neighbouring mainland were starting to clash with the Sali fishermen. From this point, conflict over fishing rights in the Kornati archipelago was constantly on the increase.

During the late 19th century, the Zadar nobility, as the former owners of the Kornati lands, were no longer able to pay taxes and levies due to the new agrarian policy in Dalmatia. As a result, they sold the Kornati islands. In 1885, the residents of Murter bought the island of Žut, and in 1896 they bought, together with residents of Betina and Zaglav, the island of Kornat with all the pertaining islands. Residents of the island of Murter in this way became owners of over 90% of the Kornati islands. The locals still lived from the sea in line with their traditions and the written right to fish they had enjoyed throughout the history of the islands.

At the end of the 19th and the beginning of the 20th century, the economy and life on the Kornati islands took on a completely different direction. This was the period of strongest agrarian activities. Areas for pasture experienced the biggest transformation as the area of cleared land became ten times larger. At the same time, a complex mosaic made out of dry-stone walls sprang up, which today we consider to be one of the most interesting cultural attractions in the area of the Park. Life slowly relocated from the interior of the islands to the coast. The harbours and settlements in bays geared towards maritime activities gained their full importance in the 20th century.

During the 1920s, land clearance (the expansion of agricultural areas) took place. From this time on, the traditional economy began to stagnate and over the last few decades tourism, as a new economic branch, has taken on a dominant position. Unfortunately, a direct consequence of tourist development is that the same number of houses has been built on the Kornati islands in the last 50 years as during the whole history of this area up to that moment.