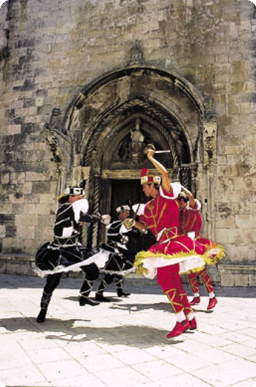 The town of Korčula is situated in the north-eastern part of the island of Korčula. In the 4th century BC, Greek colonists called this island Korkyra Melaina, while the Romans later called it Korkyra Nigra. The town of Korčula is built on a small peninsula protruding into the Pelješac Channel. It is surrounded by towers and walls which, along with the its geographical position, stress the strategic role of the town. Seen from afar, it looks like a city fortress. Its historical and cultural features have always given it a particular significance. It has always been the administrative and religious centre of the island, and is one of the most important historical towns in Croatia.

The Statute of the town and the island of Korčula, one of the oldest legal documents in this part of Europe, was written in the 13th century. The Statute regulated life in the medieval town, which was built according to the strict rules of medieval town-planning. The medieval layout of the town of Korčula, which is built in a fishbone shape and preserved as such to this day, is something that Korčula is particularly known for. The houses, buildings and churches were built in on strictly determined plots of land, and ornamented by skilfully crafted elements of architectural decoration. Door and window frames, balconies, and partition cornices animate the façades of Korčula's houses. The most beautiful examples of Korčula's residential architecture came into being in the 15th and 16th century in the characteristic Gothic-Renaissance style. In the old town centre, nearly every façade is adorned with the coats of arms of Korčula's nobility, bishops and knights, a special and unique feature. Korčula was built by local builders with stone from the island of Vrnik and Korčula itself. Equal care was given to the decoration of public spaces such as squares and streets. As early as the 15th century, the Italian nobleman and writer Pietro Casola mentions that Korčula is polished like a beautiful gemstone, and in the 17th century, an anonymous Croatian poet writes "Ornament of the world, thou famous Korčula". Among Korčula's numerous families of builders, we should single out the Karlić, Pomenić, Hranić and Dragošević families, but above all the Andrijić family, who gave us the famous builders Marko and Petar Andrijić, whose masterpieces adorn both Korčula and Dubrovnik.

Video: The walls of the town of Korčula filmed from a boat.

WHERE TO MOOR ON KORČULA