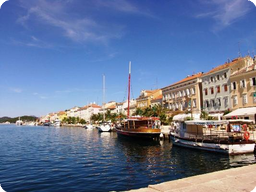 What to see in Mali Lošinj

THE CROATIAN APOXYOMENOS (2nd or 1st century BC)

The antique bronze statue of an athlete, 192 cm tall, taken from the sea bed between the islet of Vele Orjule and the island of Lošinj on 27 April 1999, is the only large bronze found to date on the eastern coast of the Adriatic. It is assumed that it was deposited in the sea at the beginning of the 1st century when it was thrown overboard during bad weather because of the danger of the ship capsizing or as a sacrifice to the gods for safe passage through the Osor channel to a prosperous destination or port of call in the northern Adriatic.

The statue represents an athlete, a young sportsman, at the moment of cleaning oil, dust and sweat from his body after a competition. During restoration, which lasted 7 years, after analysing the material and style of workmanship, the statue was dated to the 2nd or 1st century BC, although the prototype on which it was based is considerably older, from the middle of the 4th century BC.

Of the eight well-known variations of the Apoxyomenos prototype (the most famous being the bronze statue in the Kunsthistorisches Museum in Vienna, discovered in 1896 in Ephesus), the Lošinj statue is the most perfect and best-preserved. The statue’s sculptor is unknown but the classical beauty and high quality of workmanship testify to a consummate craftsman.

Restoration work is at present being carried out on the museum where Lošinj’s Apoxyomenos will be permanently displayed to the public from 2011.

VILLAS OF THE AUSTRIAN ARISTOCRACY

Most villas are situated in Čikat Bay, which in the past was well known as a sanatorium for the European aristocracy.


WHERE TO MOOR IN MALI LOŠINJ

WHAT TO ENJOY IN MALI LOŠINJ