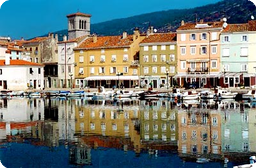 ... that Cres is the largest island in the Adriatic and is located in the northern part of Kvarner Bay, located between the Istrian peninsula and the island of Krk?

... that Cres was inhabited in the stone age and that Liburnian buildings, ancient remains, early Christian churches and monasteries are all testimony to its rich historic and cultural heritage?

... that the historical name of the archipelago, Apsyrtides, is connected with the tragic legend of Apsyrtides, the mythical hero whose murder was ordered by his own sister, Medea? She threw the parts of his dismembered body into the sea and they turned into the Apsyrtides islands.

... that the largest colony of griffon vultures in Europe is on Cres? They are special because they nest on the cliffs, high above the sea.

... that the island's sheep graze undisturbed in the open during the whole year on the islands pastures, which are rich in aromatic herbs, which means the island's specialty, Cres lamb is seasoned before cooking?

... that Cres has a special phenomenon in the shape of Lake Vrana, which is a cryptodepression? It is interesting because of its geological and hydrological characteristics, it's exceptional water quality and its beauty.

... that the best view of Kvarner is from Lubenice, an old village located 382 metres above sea level, which is rightly called the jewel of Cres?


WHERE TO MOOR IN CRES

INFO ON THE ISLAND OF CRES