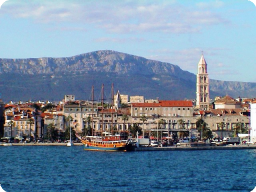 What to see in Split

The Roman Emperor Diocletian spent his declining years in an enormous palace that he had built near his birthplace, Aspalthos, in Dalmatia. With the passing centuries the original architecture of the palace has been altered, but the people of the city, later called Spalato, and then Split, were able to use the structure of the palace, damaging it as little as possible, under Byzantine, Venetian and Austro-Hungarian rule. Thus, a harmonious city came into being within the Roman walls. The beauty of the peristyle of the palace, Diocletian's mausoleum, Jupiter's temple, the colonnades along the streets, early Croatian churches, Romanesque houses, the Gates of Andrija Buvina and architectural works by Juraj Dalmatinac can all still be seen today.

Diocletian's Palace is one of the best preserved monuments of Roman architecture in the world. The emperor’s palace was built as a luxurious villa with various facilities. The summer residence was built on the lines of a Roman military camp (castrum) and divided by two main streets into four parts. The southern part of the palace was set aside for the emperor, his apartments and government and religious ceremonial areas. The northern part, on the other hand, was given over to the emperor's guard, the army, servants, storage, etc.

The palace is a rectangular building (about 215 x 180 m) with four large towers on its corners. There are four gates on each side and four smaller towers along the walls. There are no openings on the lower parts of the walls, while on the upper parts there is a monumental porch on the southern side, and arcades on the other three sides. Over the centuries, the palace's inhabitants and the citizens of Split adapted these spaces, tailoring them to their needs. As a result, both the inside and external walls with their towers, have greatly changed their appearance.

Museum of the City of Split
The founding of the museum is connected with the City Library, which was established in 1911. In 1925, two of the library's rooms were given over to the Museum of the City of Split. In 1945, the Museum became independent, and the following year, in the six rooms of the Bernardi Palace, was opened to the public. In 1948, it was named the Museum of the City of Split. The Museum, with  part of its permanent collection, was opened to the public in the Papalić Palace in 1952. The renovated museum opened in 1992, and for the first time displayed its entire permanent collection, which showed the urban, cultural, historical, artistic and economic development of the city through the centuries. Besides obtaining, preserving and protecting items, the Museum carries out publishing and printing activities, organises travelling exhibitions, lectures, courses, and seminars and also conducts research activities.

This is the only museum in Croatia established with the purpose of researching, collecting, presenting and studying the remains of the material and spiritual culture of the Croats during the Middle Ages (from the 7th to 15th century), especially during the period of the early medieval Croatian state from the 9th to the 12th century. Under the name the First Museum of Croatian Heritage, it was founded in Knin in 1893. During World War II, it was transferred first to Sinj, then to Klis and finally Split. Since 1976, the archaeological collection has been housed in an impressive building. It has a fund of about 20,000 items. Its collection of early medieval braided and figurative sculpture, and large amount of stonework with early Croatian inscriptions in Latin is one of the largest such collections in Europe. Stonework from the 9th to 12 century on which the names of Croatian rulers are inscribed together with those of secular and ecclesiastical figures represents the oldest Croatian archive, an "archive in stone".

Ethnographical Museum
The museum has a wide range of ethnographic items from Dalmatia, and also other cultural areas. Besides original pieces, the Museum also shows modern aplications of traditional culture. It also presents aspects of modern popular culture that have been influenced by the past. It looks after and promotes the values of folk heritage, restores and exhibits items, and promotes ethnography and ethnology.

Croatian Maritime Museum
This permanent exhibition is intended to give a complete presentation of the military and merchant naval past of the inhabitants of the Eastern Adriatic. The exhibition follows a chronological order from the arrival of the Slavs to the end of the 20th century. Today, the exhibition presents the period from 1918 to 1945 with the use of the courtyard area to show heavy weapons and ships. The Museum also possesses a collection of naval equipment, weapons and navigation instruments, pictures, model ships, uniforms, works of art and other items from archive and library materials.


WHERE TO MOOR IN SPLIT