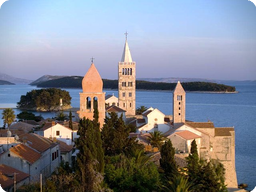 The old town of Rab is the main town on the island of the same name, which is one of the sunniest places in Europe. It is situated in Kvarner Bay between the islands of Krk and Pag. It is separated from the mainland by the Velebit Channel. The closest part of the island to the mainland is its south-eastern headland at 1,800 metres. The island is known for its luxuriant vegetation (40% of its surface is covered with woodland) and it is one of the greenest islands in the Adriatic.

On entering the old town of Rab, you'll be met by the white stone of the sunlit Square of St Christopher. There is a fountain in the square adorned with two sculptures of Kalifront and the shepherdess Draga, figures from a legend of chaste and unhappy love.

The town is a typical medieval urban centre surrounded by walls that are in large part still standing. The old town is dominated by four bell towers, mainly in the Romanesque style. Rab was a Roman settlement, and was given the status of town by Octavius Augustus, who proclaimed it a municipium in the year 10 BC.

If you love old towns in which every building recalls dozens of generations, you will love Rab. Above many of the Renaissance and Gothic portals, you can still see the crests of the aristocratic families of Rab, the descendants of whom are your kind hosts today.

Right next to the town walls is the lovely Komrcar park, and below it a long path and bathing area. You can spend your holiday in the shade of ancient pines, with the smell of resin and the blue of the sea, without having to do without the conveniences that a town has to offer.


WHERE TO MOOR IN RAB