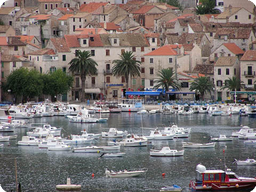 Positioned in a deep-lying open harbour on the western coast of the island of Vis, and at the foot of the nearly 600-meter-high Mt. Hum, Komiža (with 1,667 residents, according to the 2001 census) is a picturesque Mediterranean town with narrow streets, attractive stone houses squeezed together along the harbour and numerous beaches. The mild Mediterranean climate makes a stay in Komiža desirable even during the winter months. Along the entire eastern side of Komiža Bay, there are many pebbly beaches with springs of fresh, flowing water at Gusarica, Nova Pošta, and Velo Žalo. Komiža is known as the home of the masters of fishing on the eastern coast of the Adriatic. Not only did its fishermen and their vessels dominate in the region and actively trade with neighbouring shores, but as emigrants to the Americas, they also established thriving fishing communities on both the South and North American Pacific coastlines.

Back in 1928, the citizens of Komiža established the Society for the Preservation of the Beauty of Komiža. The tourist board of Komiža has more than 1,000 beds registered in the private sector in apartments, studio apartments and private rooms. The modern Hotel Biševo is on the outskirts of the town, adjacent to the town beach. It has 300 beds in 126 rooms and 5 apartments. The hotel has many amenities, including a wellness centre and mini-golf course.

In 1993, Komiža became a municipality and in 1997 it was given the status of town. The town of Komiža also comprises the neighbouring villages of Borovik, Duboka, Oključna, Podhumlje, Podšpilje, Žena Glava, and the neighbouring islands of Biševo, Palagruža and Sveti Andrija (also known as Svetac), as well as the volcanic islands of Brusnik and Jabuka. The maritime zone of Komiža is well-known for its wide range of fish. The waters off the island of Jabuka are famous as one of the richest tuna grounds in the area. All the islands in the Vis archipelago contain large crabs, lobster and quality fish. The top Komiža restaurants and family-owned wine cellars would find it impossible not to include these famous offerings from the seas, as well as other Dalmatian specialties. In the last few years, due to the increased interest of tourists, especially nautical tourists, private agro-tourism activities have visibly flourished on Vis and Biševo. However, they still  remain and peaceful places. Sports enthusiasts and active types have many options on Vis, including paragliding, diving excursions, horseback riding, trekking, cricket, as well as a number of possible boat trips to neighbouring islands, all the way to Diomedes’ island of Palagruža.


WHERE TO MOOR IN KOMIŽA