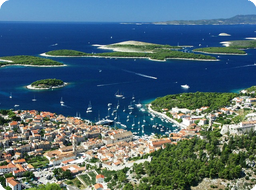 Welcome to Hvar, an ancient town with a rich history on the island of the same name. The island is the sunniest in the Adriatic. Many people say that Hvar seems like a town from a fairytale because of its architecture, wonderful nature and mild climate.

In Hvar, everybody can find something to give peace to the soul and relaxation to the body, and not without reason, as the town recently celebrated 140 years of organised tourism.

Hvar is like a monument in itself. The centuries have carved its stone, and the ages, above all the Renaissance, have shaped its appearance. Monuments within monuments, and monument upon monument. Hvar is a jewel hidden by time.

We advise you to visit the Fortica fortress (Španjola), Hvar cathedral, the theatre (established in 1612), the arsenal and the Franciscan monastery.

However, Hvar is not only monuments, there is the harbour and also the Pakleni islands, which are situated at the entrance to Hvar Bay. There is also the therapeutic climate, the restaurants and cafés, the warm hosts and everything that creates the spirit of an exclusive tourist resort.

The night life in Hvar attracts young people from all over the world. A typical partygoer’s day in Hvar involves getting up just before noon and then having coffee in one of the bars overlooking the waterfront or square.

After that, it's lunch in one of the local restaurants, with fresh fish, local vegetables and virgin olive oil, washed down with the local wine. Then it’s time to go on an excursion by boat to one of the bays of the Pakleni islands, enjoying the perfect sea and sun until evening.

After returning, its hanging out in the cafés in the afternoon and wandering around the old stone streets, visiting the architectural attractions in the town  centre, which is just a warm-up for a cocktail evening in Carpe Diem, and then off to a disco in Fortica.

When you add the natural Mediterranean cordiality and kindness of the hosts, then Hvar is an ideal holiday destination.

Hvar is proud of the oldest municipal theatre in Europe. The town has been built over time by notable Croatian and foreign architects, celebrated in verse and painted by artists. However, the town itself is the best narrator of its story. It is enough to come and see for yourself. That way you can touch a piece of the legend yourself.

Video of the island of Hvar:

Americans have chosen: Hvar finds a place among the top 10 party destinations

One of the most beautiful cities on the Croatian coast, Hvar, finds a place on the list of the best party places in the word. The list was posted on the Huffington Post webpage. Hvar is listed together with prestigious and famous destinations such as Las Vegas, Saint-Tropez, Ibiza, Rio de Janeiro and Berlin. The site recommends Hvar as one of the best places to visit in the coming year for all of those who like having good fun.