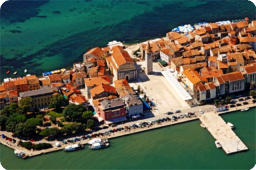 Where to get supplies and eat well

It is said that the Phoenicians and ancient Greeks brought wine to Istria. The ancient inhabitants of Istria, the Histrians, successfully mastered the skills of growing the precious vines and also the skills of wine production. Among the many sorts of wine in this region, the most important are the Istrian white malvazija, the typically Istrian teran, the red borgonja, red hrvatica, and many other world-famous quality wines, like white pinot, chardonnay, grey pinot, red merlot, refošk and cabernet sauvignon. It would be a sin to forget the two sorts of muscat, the Momjanski and the Porečki. Therefore, it is no wonder that in Bujština, the region in Istria between the rivers Dragonja and Mirna, one of the most famous wine trails in Croatia can be found, with as many as 22 well-known producers of Istrian wine.

What is Istrian cuisine? Does it mean dishes that the Istrian peasants used to eat in ancient times? Or maybe those dishes once prepared in the houses of patricians? It's all of these and a lot of more, since Istria's stormy history has left its traces in the cuisine, too. Different traditions have become entwined in Istrian cuisine, which has its basis in the surroundings (aromatic spices, wild plants, vegetables, sea food), but which was influenced by Frankish and German rule, Serenissima, Roman dishes, and certainly a Slavic influence from the East. Fish, shellfish and molluscs used to make up the basis of coastal cuisine. But today on the Istrian coast, one can be offered sauerkraut, baked sausages and ombolo, as well as gnocchi with hare, fuži with venison, and macaroni with sausage sauce. Istrian smoked ham and sheep's cheese cannot be beaten, both dried by the mixture of alpine and Mediterranean air and blessed by the Bura wind from the Gulf of Trieste. Different sorts of minestre, jota and fritaja make up the most distinctive flavours and fragrances of this area. And at the end of the feast, the obligatory Istrian delicacies: pinca, fritule, kroštule, etc. At the pinnacle of Istrian gastronomy, there is the truffle of Istria. Nobody knows whether it is a food or spice! In 1999, the biggest and heaviest truffle was found in Istria (1.31 kg) and has entered the Guinness Book of Records. All of these delicacies can easily be found in more than five hundred restaurants in Istria, many of which are in the Bujština region close to Umag, the famous Croatian tourist destination. There are so many quality restaurants, taverns, pizzerias and pastry-shops. And it is no wonder, since the development of tourism half a century ago began with restaurants. Today, certain restaurants have the significance of institutions in the area. We shall name only a few, in  no particular  order: Bruno, Maruzza, Toni, Badi, Dante, Koralj, Kristal, Giovanni, Bušcina, Valica, Kažun, Kremenje and many more.


WHERE TO MOOR IN UMAG