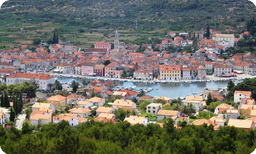 The Ancient Greek and Roman periods

Stari Grad is a contemporary of Aristotle. In the same year, 384 BC, as this famous Greek philosopher was born in Stagira in Thracia, Greeks from the island of Pharos in the Aegean Sea founded a city on the island they called Faros. The origin of this name is still a mystery, but it is possible that it was a result of a phonemic change in the original island's name.
The people of Pharos found a strong Illyrian community on Hvar. They had a settlement at the bottom of Starigrad Bay. It was protected by two forts on the northern and southern hills (the Glavica and Purkin ridges). The battle between the natives and invaders for this exclusive location was short and fierce, and the ancient historian Diodor of Sicily wrote about it in the 1st century BC: “The people of Pharos let the barbarians stay in their fortified location and founded their city by the sea, building walls round it. Later, the barbarians on the island could not tolerate the Greeks and called upon the Illyrians living on the mainland opposite the island. More than ten thousand of them came to Faros on board many small ships, and attacked and killed many Greeks. However, the Governor of Lis, appointed by Dionysus, sailed with a large number of three-sailed boats to fight the Illyrian boats, sinking some, capturing others and killing more than five thousand barbarians, taking two thousand prisoner”.

The town became a powerful independent state (polis). It minted its own coins, had pottery workshops and an abundance of food grew in the fertile fields of Stari Grad Plain. The subdivision of these fields and the roads criss-crossing at right angles were a significant building achievement in the ancient period, and remain the best preserved example of Greek land division in the Mediterranean.

In the 3rd century BC, a man from Faros, called Demetrius became a famous soldier. Ancient historians (Polybius, Appius, Dion Cassius) wrote about Demetrius, his unpredictable political power struggles and his unfaltering loyalty to his home town. Modern writers have brought him back to life in their historical works (V. Pribojević), dramas (D. Demetar), novels (A. Tresić-Pavičić, F. Dosen), songs and stories (V. Barbieri) and operas (J. Gotovac). History, legend and fiction are interwoven in this ancient Hvar hero allowing his character to emerge in different situations. He is first portrayed as a man of trust and the lover of the Illyrian Queen Teuta. He is then Illyrian state ruler for a brief time when Illyrian territory stretched from the River Krka to the Albanian coast, with Faros as its centre. After that, he is portrayed as plotting against Rome with Hannibal of Carthage and Philip of Macedonia (the two greatest people of the time) as allies and trying to return to Faros. Finally he is an advisor to the Macedonian King, Philip the Great.

Demetrius's rule played an important role in the fate of the town. When his scheming became a dangerous threat to Rome in 219 BC, the Roman Consuls Paulus Emilius and Marcus Livius cunningly defeated Demetrius's army in Faros. Demetrius clandestinely fled on board a ship never to return to the island.  His life ended in a battle for a Peloponnesian town. Faros was destroyed by the Consuls, as related by ancient historians. The town was rebuilt soon afterwards and was ruled by Rome.

An inscription from the 2nd century BC entitled Farska psefizma talks about a delegation from Faros to the island of Pharos and the Oracle of Delphi. The Roman Senate and people are mentioned, as is their friendly and benevolent disposition towards Faros since the time of their ancestors. The town was in need of help and the people of Faros went looking for it on a remote island in the Aegean Sea, where the founders of their town had originated from 2 centuries before.

Ancient sources rarely mention the Roman Pharia. Town life without earthquakes, battles or tragedies did not attract the attention of historians. There was a long period of Roman peace lasting for centuries. The fields produced a lot of wine and oil, the bay provided protection for ships, and trade with the mainland was full of profit. Many artefacts from Roman times offer a basis for reconstruction of the period. There are many inscriptions, mosaics, gravestones, stone reliefs, luxurious pottery, jewellery, coins and a country house in Polje. There is an inscription from the 2nd century BC on a country villa in Kupinovik, near Dol, mentioning a town councillor Gaius Cornificius Carus. A colourful mosaic in a villae urbanae (urban villa), which was probably a large public building, nowadays under Srinja Kola, is also from the 2nd century. The Roman Pharia was an independent municipality at the time.

In the 5th century, the Christian community of Pharia built the first place of worship in the south-east corner of the town, near the town walls, on top of a Greek house that had been the meeting place of the community a century before. In the 6th century, at the time of the Byzantine Emperor Justinian, when the ancient world was living the last days of its glory but could see that the end was near, this strong Christian community built a double basilica with a baptistery font on top of this church: St. Mary’s/St. John’s.

(From the book by A. Čavić: Stari Grad, a Historical Guide; published by Centar za kulturu Stari Grad, 2004.)


WHERE TO MOOR IN STARI GRAD